When Sandi and Ed Taylor came to the County in 1993 they knew they wanted to both farm and produce maple syrup on a small scale. A year of searching led them to what is now known as Honey Wagon Farms located just down the road from the Waring House. This purchase allowed them to fulfill that desire to grow veggies without the use of herbicides, fungicides or pesticides and to make maple syrup.

The farm originally had a limited source of maple trees. Fortunately, several years after moving in, they were able to add to their maple operation with the purchase of an adjacent sugar bush from the Lockyer family. Now each new season begins with the tapping of 550 trees at the back of their 86 acre farm.

They began production using traditional methods and continue to do so today. They still hang buckets to gather sap, boil on an open wood fired evaporator in the sugar shack located close to their house and filter the syrup, gravity feed, through felts. Their syrup is sold in uniquely designed decorative gift bottles….great for home use or as gifts for family and friends alike. In keeping with their efforts to be environmentally friendly these bottles lend themselves to a variety of uses after. 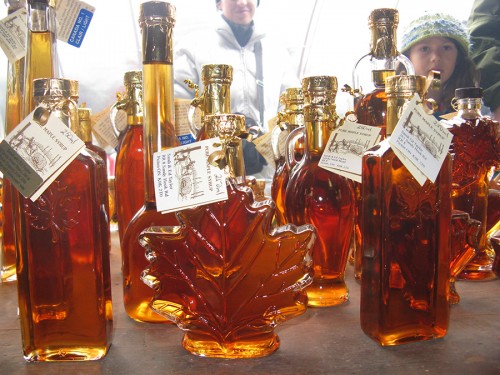 Icicle circles around the trees at middle Cordova Falls Ontario

This site uses Akismet to reduce spam. Learn how your comment data is processed.

© Pureontario.org
Translate Web in Your Language »